The monument was dedicated on June 1, 1948 and is located between the Town Hall and the First Parish Church, on property owned by the church.

In the 1944 annual meeting documents of The First Parish Church, there can be found a list of the names of 31 veterans who were then serving in the military and members of the church. A letter was drafted at this meeting to be sent to them. The War Services Committee of the Church had been sending letters and gifts to “...all our men and women in the service of our country...” before this date. However this list of York men who were in the service of their country is the first list of its kind that has been found.

In the 1945 annual meeting documents another letter had been composed and sent to those in the service of their country. This time the list had 39 names, once again in alphabetical order.

In a September 19, 1946 special meeting, the first expression of intent by York residents to erect a monument for those who served in WWII was found. It reads as follows:

“A motion that the thanks of the members present be expressed to the members of the War Service Committee for their action in sending Christmas cards to all our men and women in the service of our country and that the War Service Committee be instructed ‘to make plans for a fitting memorial to the men and women who have served in the Second World War and a special memorial to those who have laid down their lives for their country.”

Apparently this was an idea whose time had come because in the Town of York’s 1947 Annual Report on page 78A, Article 56 the citizens of York were asked: “To see if the Town will vote to raise the sum of $1,500 to be paid to the American Legion Post for the purchase and erection of a brass Memorial tablet listing the names of the York men who served in World War II”

Note: The York Furniture was in business for many decades and was located on Simpson’s Warf in York Harbor. At that time it was run by H. Leslie Dorr and his wife Ruby.  Effie Hanson (husband Richard) who lives near Situate pond is Ruby’s nice in law.

Memorial Day fell on Sunday in 1948 so the parade and dedication of this monument came on Monday, May 31. According to the York Weekly, it was made possible by the “… hearty cooperation of the members of the American Legion and Veterans of Foreign Wars posts who have devoted much time and thought to preparations for the yearly event.”

The parade committee was chaired by Benjamin Blakeman and include Carl Lunt and G. Howard Dunning of the American Legion and Francis Stacy, Commander of the VFW, with Harry Freeman and Harold Hutchins. 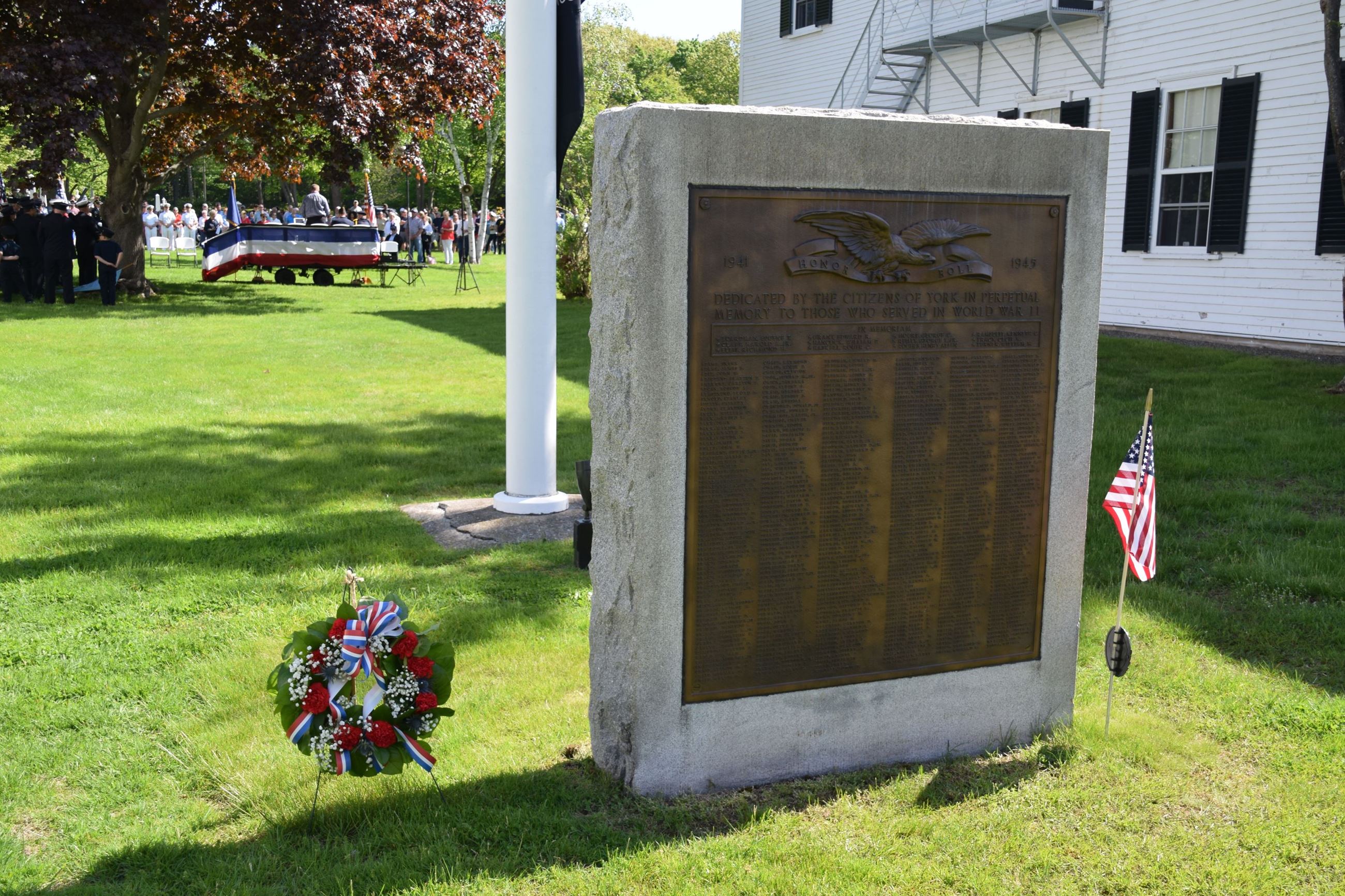