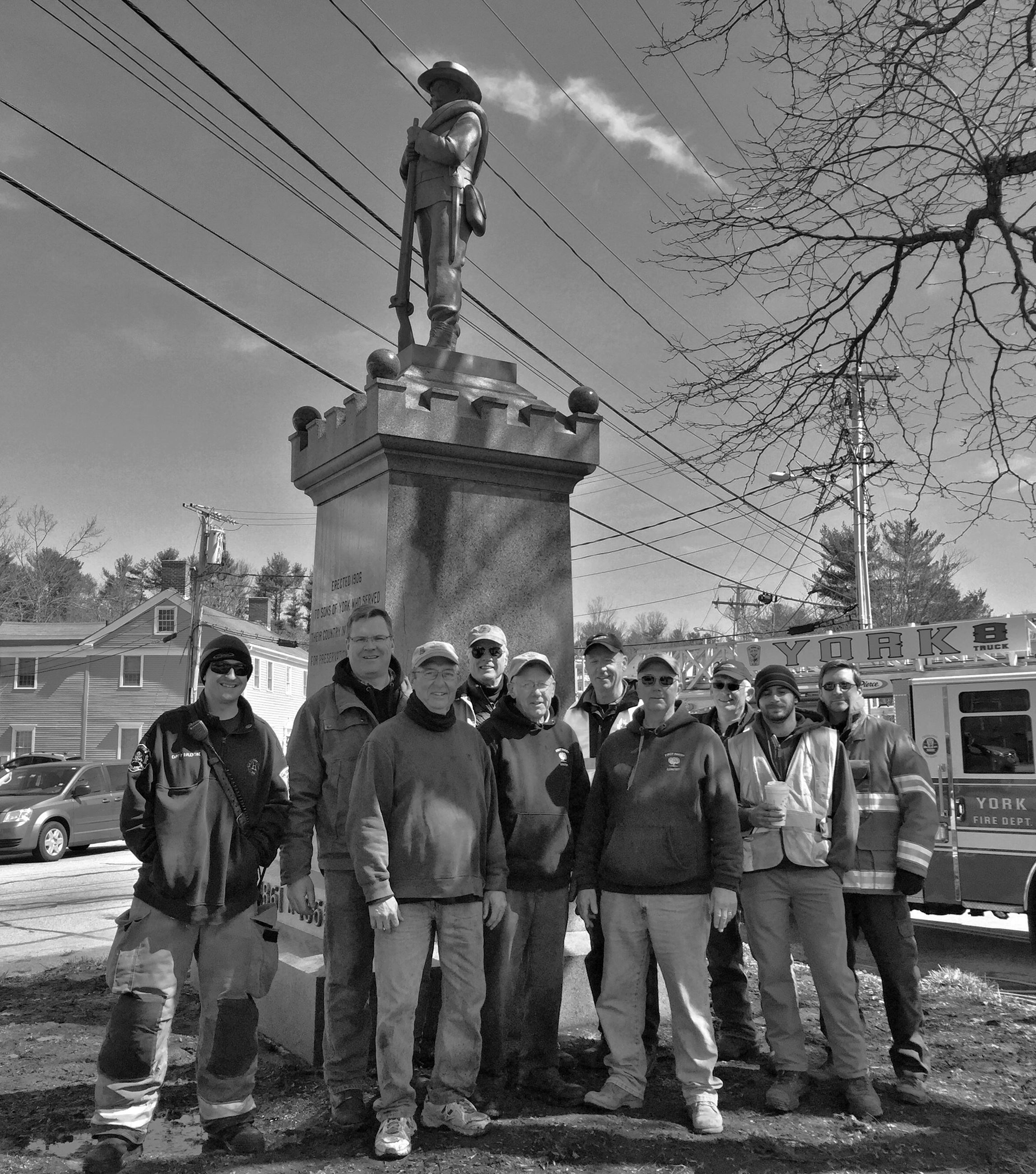 York Town Manager Steve Burns took this picture just after the Soldiers’ Monument had been given a good power washing on this fine spring day. After 112 years of sitting in the same spot, the monument deserved and benefited greatly from the attention. The First Parish Cemetery Maintenance Crew and firemen from the York Volunteer Fire Department united in what was generally considered to be the first good cleaning of The Soldiers’ Monument since its dedication on Memorial Day, 1906.

In the background we see the York Fire Department’s multi-purpose fire truck #8. This vehicle can do aerial work, carry and pump 1,000 gallons of water as well as deliver firefighting hose and personnel to a fire scene. 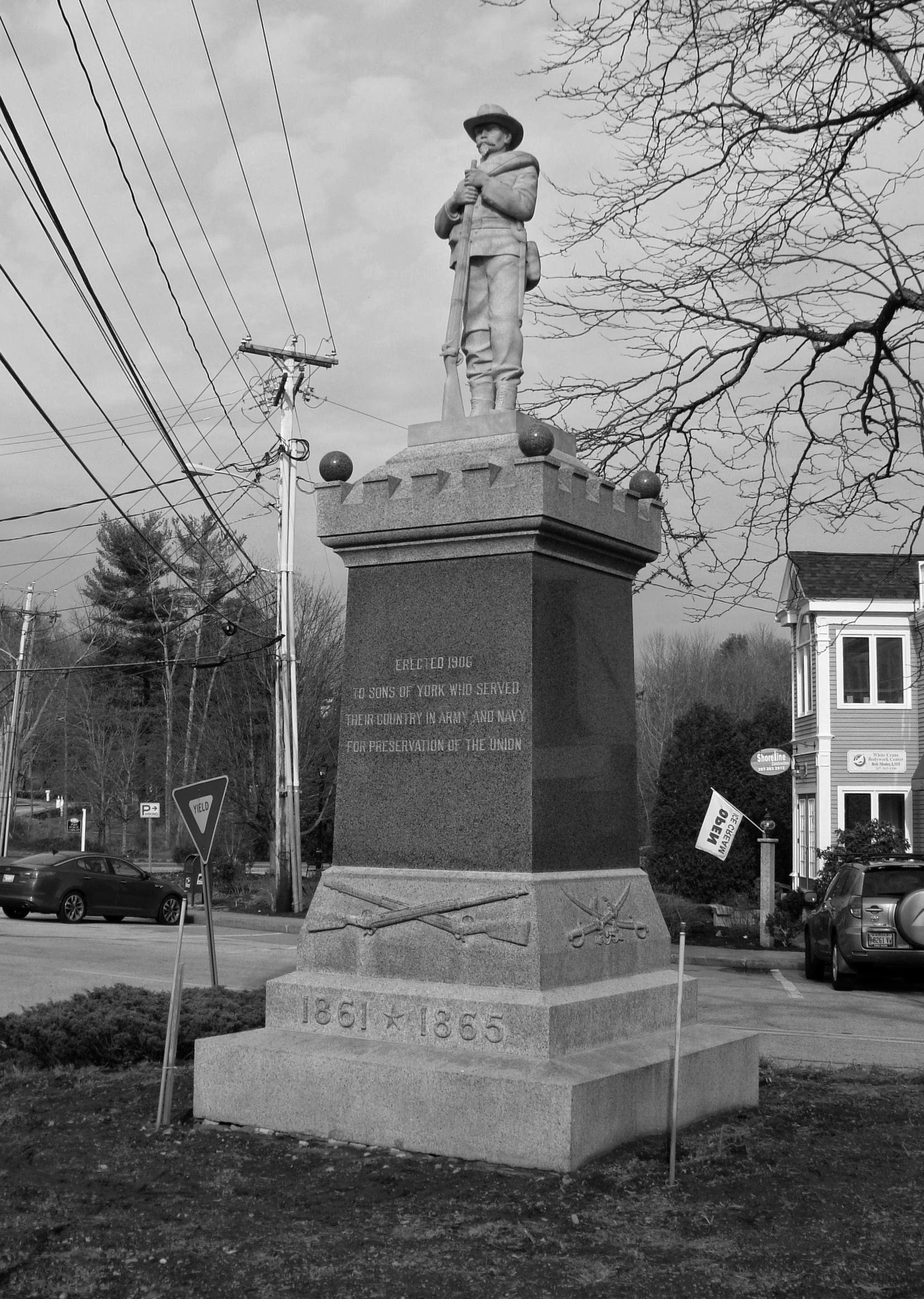 Taking a good picture at this point in the history of the Soldiers’ Monument is a challenge. On April 6, 2018 we see leafless tree limbs not hiding Christmas decorations, the bare ground of early spring and power lines all conspiring against the camera. Most if not all of that will change in the coming years when the York Village Revitalization Project gets underway.

The Soldiers’ Monument statue is made out of Westerly, Rhode Island granite, a fine textured stone perfect for detailed sculpting. The soldier’s uniform is typical of the Spanish American War period, when the monument was built. He stands on the “cap” which has four polished cannon balls, one at each corner. The darker center section is called the “die” and it is also polished. Granite always appears darker when polished. Incised into the die is the inscription “Erected in 1906 To Sons of York who served their country in Army and Navy for preservation of the Union.”

The monument has three bases and from top to bottom they are referred to as the third base, second base and the lower base. The lower base sits on the buried foundation. The three bases, die, cap and cannon balls are all made out of what was then called Medium Quincy Granite.

The Soldiers’ Monument was shipped by rail directly to York, Maine from where it was made in Quincy, Massachusetts. The veterans committee paid the monument maker $50 to set the monument on the foundation. All of this happened under the watchful eyes of the same Civil War veterans who helped design and purchase this monument. These same veterans also chose the keynote speaker for the May 26, 1906 dedication. That speaker was Maine’s own Civil War hero, president of Bowdoin College, four times elected Maine governor, Medal of Honor recipient Major General Joshua Lawrence Chamberlain. Chamberlain led the 20th Maine Regiment that defeated Confederate Army soldiers on Little Round Top, a pivotal moment in the Battle of Gettysburg, July 1-3, 1863.

The York, Maine Soldiers’ Monument is a Civil War monument that pays tribute to all of the aging veterans who fought in that conflict. The monument is surmounted with a hand sculptured US Army soldier. The committee of veterans chose to order this finely detailed statue with a uniform and accouterments contemporary to the period in American history when the monument was ordered - 1905. By making these choices, York’s Committee of veterans were paying tribute to all men in America’s military who served, fought and died in the Civil War, the Spanish-American War, the Philippine Insurrection and the Boxer Rebellion. The Soldiers’ Monument is York’s most inclusive war monument and it is how these York veterans chose to pay tribute to the men who served in the conflicts of those times.